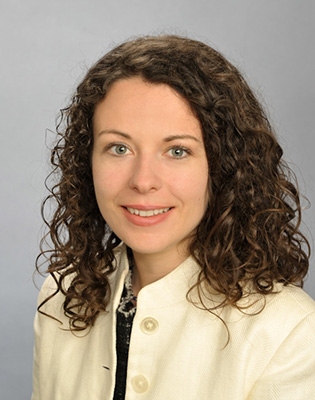 Geraldine Canny holds a B.Sc. in Biotechnology from National University of Ireland Galway and a Ph.D. in Immunology from University College Dublin. Her doctoral work focussed on the role of pro- and anti-inflammatory molecules in the intestine. She then carried out a CCFA-funded postdoctoral fellowship at Brigham and Women's Hospital, Boston where her work addressed the molecular regulation of epithelial antimicrobial proteins and their function in mucosal immunity. She held the position of Instructor at Harvard Medical School from 2005-2007. Her awards include the Crohn’s and Colitis Foundation of America Young investigator of the year.

Subsequently, as Senior Lecturer at Lausanne University Hospital and the University of Lausanne, she established and ran a translational research programme on endometrial biology and endometriosis. This work, financed by the Swiss National Science Foundation and other funding agencies, involved a three-pronged approach using molecular biology and cell culture, clinical samples and a mouse model of endometriosis and resulted in the discovery of novel biomarkers and several publications. During this time, Geraldine established the ethics framework for her division and was a member of the University of Lausanne Faculty of Biology and Medicine Research Commission and of the Selection committee for the International Ph.D. Programme. From 2009 to 2012 Geraldine also held the position of Adjunct lecturer at University College Dublin.

Geraldine was then employed at a foundation and at Ecole Polytechnique Fédérale de Lausanne (EPFL) where she managed several national and international fellowship programmes as well as European funding programmes. On a voluntary basis, she also established the regional platform for a public-private partnership devoted to patient education and facilitated an endometriosis patient education group.

Between 2018 and 2021 Dr. Canny held the position of Marie Sklodowska-Curie Actions (MSCA) National Delegate and National Contact Point. During her tenure as Head of the Irish MSCA office funding awarded to Irish HEIs, companies and non-academic organisations exceeded 95 million euros. She led a project under the Net4Mobility+ CSA and as National delegate, contributed to the policy underpinning MSCA in Horizon Europe. She also served as a Steering committee member for several MSCA COFUND programmes and for the Irish Health Research Forum.

Geraldine’s current interests include mucosal immunity, immune-endocrine system crosstalk, hormone signalling and anti-inflammatory lipids. She is a member of several professional organisations, European RRI networks and serves as a reviewer for various journals and as an advisor for a swiss Startup company (non-remunerated).